We’re Josh and Sarah, the two friendly faces behind this slice of the internet. On this page you’ll find a little bit more about us two crazy vegans, plus a few extra things about Veggie Vagabonds.

It all started in the Steel City (Sheffield, UK) where I (J) was a bartender and Sarah was a disco dancer. One fateful night we caught eyes across the bar and within the space of a week became joined at the hip. Glued together by matching morals and an unquenchable appetite for adventure, a trip was planned and we called ourselves Veggie Vagabonds. Still, this was many years before the start of the blog.

It’s a never-ending source of inspiration, energy and the biggest motivation behind our actions. With so much to explore we opted against a static life filled with material possessions and decided on a journey of vagabonding and adventures.

From climbing mountain peaks with pilgrims in Sri Lanka, completing the UK Three Peaks Challenge by Bike to raise environmental awareness, surviving life as a vegan in Vietnam or rock climbing in the forests of France… we live by Helen Keller’s opinion:

“life is either a daring adventure, or nothing at all”.

In 2017 we made a big decision to stop flying and that’s when things really got exciting. We embarked on a plant-powered cycling expedition heading towards India on a very wiggly and indirect route. There’s no rush and as we’re prone to many adventure-inspired detours who knows where we’ll end up…

And what about the blog? Well, Veggie Vagabonds was created as a platform to share our experiences, build a community and provide resources for people wanting to embrace the outdoors in an ethical way.

We think the world would be a much better place if we all spent more time outside – Veggie Vagabonds is our way of spreading that message.

Find out a bit more in Our Mission 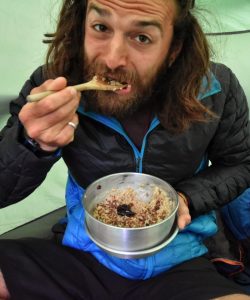 Yo I’m Josh, I’m cursed with a restless soul but blessed with a bottomless appetite. I’ve never eaten meat, I feel most at home in the outdoors and I like to climb up things. Besides the obvious, I’m real interested in world religions, I crave spicy food and I like to cook with music blasting.

At Veggie Vagabonds I’m the dude behind the photos (most of them), run the techy side of things and our communications. Sorry if I’m slow replying…

Interesting fact: half my family are Iranian and the other half are South African!

Hi I’m Sarah, I was born eager to explore which means I always say yes to new things. I have a love for nature, a curiosity to learn about new cultures and especially adore being by the sea.

One of my biggest passions in life is food: eating it, cooking it or learning about its roots, if it’s food-based I dig it.

I’m our expedition manager, the resident social media butterfly and deal with most of our vegan realm. 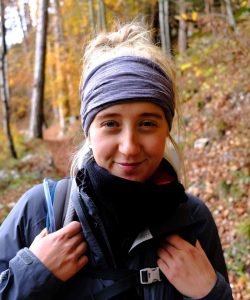 What can you expect to find here at Veggie Vagabonds?

We’re real happy you found us and hope you enjoy browsing – you can find all of our articles here.

Now you know a bit more about Veggie Vagabonds join us on social media or drop us an email for some chit-chat.

Get our latest articles, adventures and insider news by signing up below - you'll also receive our Ethical Adventure Planning Guide!

Start planning an ethical adventure of your own with the resources below!

Click here to find the rest of our articles

We've been a bit quiet these past days, sorry abou

Who would have thought that our hike last week wou

With our plans to leave next month, pedalling towa

Looks like spring is well & truly making its arriv

That face you make when, A. You're not sure if le

You don't need to hang around here long to know th


Error: API requests are being delayed for this account. New posts will not be retrieved.