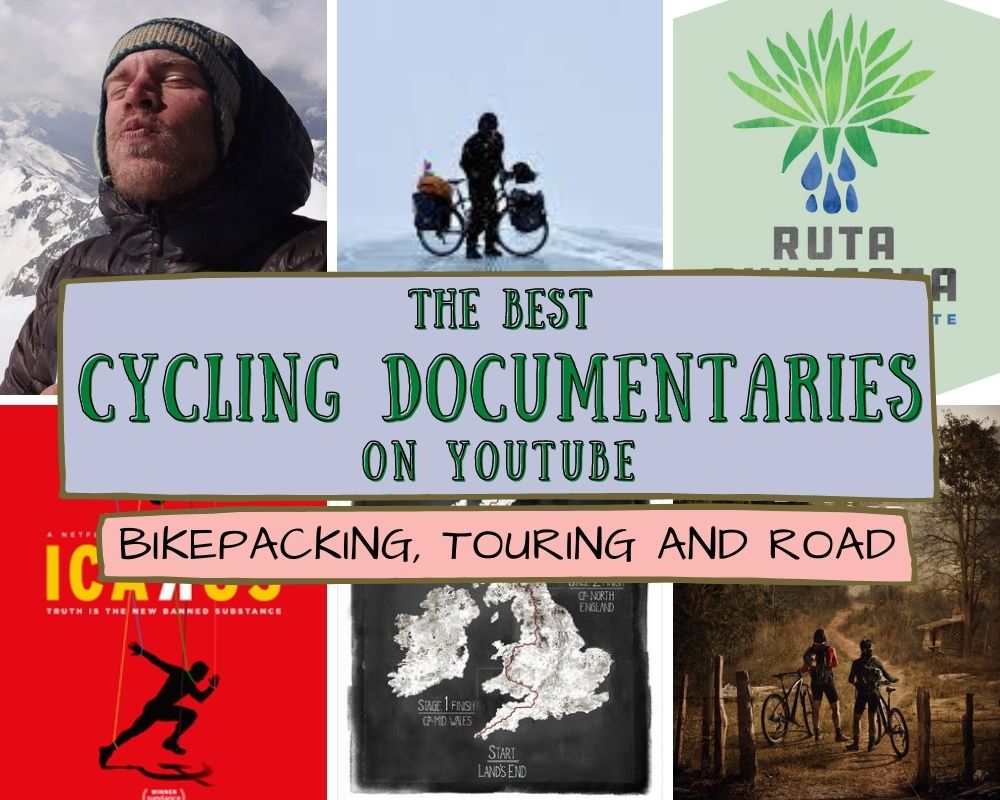 Ever since us humans invented the camera, we’ve been documenting our adventures.

And, fortunately for us, cyclists do this a lot.

From bare-bones bikepacking adventures to epic round-the-world cycle tours and gruelling feats of endurance on the tarmac. Regardless of your two-wheeled persuasion, nowadays bicycle lovers can find a plethora of inspiration at the click of a button.

At Veggie Vagabonds we’re absolutely mad for some good adventure viewing and have whittled down a list with some of our favourites from around the world. You’ll find feature-length bikepacking videos and cycling films to shorter tales of touring escapades and personal bicycle exploration.

To make it accessible to as many hungry riders as possible, nearly all of these videos are available on YouTube, Vimeo or something similar. That means they are FREE to watch. Now we can all get knee-deep in adventure inspiration!

Author’s note: this article took a damn long time to write… impossible not to cycle down countless rabbit holes on YouTube!

I Want to See the World by Iohan Gueorguiev

In honesty, this list was inspired by Iohan’s adventures. The I Want to See the World series are some of the best bikepacking videos on YouTube, documenting Iohan’s offroad journey, travelling from North to South America.

Iohan is a true bicycle explorer. His positivity and energy are infectious, despite being faced with many gruelling and unnerving experiences. The style of his backcountry cycling will inspire you to ditch the road, travel light and embrace every encounter, human and animal alike.

Sadly, Iohan passed away this year and so I hope we can keep passing on his incredible tales of exploration and warm personality.

From Cape to Cairo by Bike

If you have a passion for people, the world, travel, bikes, cultures, adventure, Africa, stories or nature, you have to watch this. Actually, even if you have no interest in those things, you should still watch. It will fill you with happiness and inspiration.

Anselm’s solo journey through Africa is one of the most uplifting, exciting and powerful bits of cycle-viewing we’ve seen. It captures the countries, nature and very crucially the people in such a wonderful light.

After watching it made us reconsider our bikepacking plans and head for Africa.

The Road from Karakol

Kyle Dempster embarks on a solo cycle tour across Kyrgyzstan with a trailer full of climbing gear, an appetite for remote mountains and some partially accurate maps.

It’s a raw insight into his experiences, the good and the bad, the highs and lows. It shows that even the toughest of adventurers come across challenges that make them crap their pants.

Lachlan Morton is a bike racing phenom and this is the story of his UK-based Land’s End to John O’Groats challenge.

This 2,000-mile ride has 4-stages (yes, that means 500-mile a piece) and takes road, gravel and single-track routes through some of the UK’s most incredible natural landscapes. It’s a short cycling film that shows crazy feats of endurance. Amazing stuff if you’re planning a long-distance grueller of your own.

If you want more adventure inspiration and guides to your inbox, sign up for our newsletter to get our latest articles

A Bivvy, a Phone and a Drone: Cycling Home From China

Not all epic bikepacking documentaries have to have big budgets.

A Bivvy, a Phone and a Drone follows Josh Reid as he cycles his bike from the Giant bike factory in Shanghai back to his home in the UK. His adventures are simply documented with a phone and a drone (hence the title) whilst he bivvy camps his way through the 15,000-mile and 19-country journey.

One of our favourite bikepacking documentaries on YouTube because of its simplicity and feel-good style.

In September 2021, two young adventurers had 30 days off work… would it be possible to cycle 2,000 miles to all 15 UK national parks in that time?

Okay, so the two young adventurers are Sarah and me. A shameless plug of our Ride for the Wild film, but we think you’ll like it!

The 2,000-mile route was filled with twists and turns, sensational highs and agonising lows, taking us through some of England, Scotland and Wales’ most incredible natural areas. It meant cycling 60+ miles a day and camping along the way… we were blown away, in many ways!

The most beautiful but brutal experience of our lives, and raising money for a brilliant cause. This is how it all unfolded!

The guys at Pannier and Brother Cycles make videos that perfectly showcase some of the best bikepacking in the UK.

Rainspotting follows their trip, catching a train from London to the Scottish Highlands, then smashing out an 80-hour bikepacking ramble through the Grampian mountains in the West Highlands.

The filming is beautiful and really shows the nitty-gritty aspects that make outdoor trips special. You get a nice insight into their group dynamic and feel like you’re going along for the ride with them. If you’re planning a winter bikepacking trip in Scotland then you gotta give it a watch.

The Man Who Cycled the World

Mark Beaumont is arguably the most famous endurance cyclist around. And, a lot of that has to do with this round-the-world cycling feat.

In 2017, Mark broke the record for cycling around the world by a whopping 44 days. His 18,000-mile ride was gruelling and to make things harder, he had a film crew following him along for the journey.

The Man That Cycled the World shows all the trials and tribulations he faces and you can watch the full 4-part cycle touring documentary on YouTube.

Planning a trip to South America? Chingaza National Park in Colombia is home to the Páramos, which contains all the natural drinking water for Bogota. The Ruta Chingaza is a new route, opened by Bikepacking for Conservation, which links the water source to the city it supplies.

This epic looped route looks both beautiful and brutal, and the cycling documentary shares its opening, along with a charming insight into bicycle culture in Colombia.

The Silk Road Mountain Race started in 2018 and is a single-stage, fixed-route and unsupported cycling race through the mountains in Kyrgyzstan. It’s a wild, remote, 1,120-mile route that takes in over 30,000 metres of ascent… definitely a grueller!

Wild Horses beautifully documents the first year, showing all the trials and tribulations the riders go through. More than 80 started the race. Less than 20 finished… as the documentary says: you need to be more than a good cyclist to cross the finish line.

The Impossible Route is a wild 7-day gravel cycling adventure across one of the most hostile landscapes in the world. 740 miles, 14,000 metres of climbing and one water source for the whole trip…

And it isn’t even a cycle route. It’s the California Backcountry Discovery Route which is meant for motorcycles that can carry water a LOT easier.

Some really enjoying watching from the Plant-Based Cyclist (biggups to vegan cycling!) on a route that seems absolutely nuts (especially coming from the UK).

Some more to explore later…

1,200 Days Around the World on a Unicycle by Ed Pratt

So not exactly a cycling documentary. It’s missing one wheel. But it’s bloody awesome nonetheless.

In 1952, Matty’s grandad cycle toured around Norway. His grandad didn’t tell anyone about it but he did keep a photo album that documented the adventure. After his grandad passes away, Matty and his girlfriend Clare decide to retrace his footsteps.

The riding in Norway looks completely off the chain and the relationship between Matty and Clare is heartwarming. What with the inspiration behind the trip, we think it’s one of the most inspiring and touching cycling documentaries on YouTube.

Rebecca Rusch teams up with her Vietnamese riding partner, Huyen Nguyen, to find the location her father’s fighter plane was shot down during the America-Vietnam War.

It shows the harsh reality that Vietnam endured during the war and the scars left since.

This is one of the free documentaries on Red Bull. If you haven’t checked them out already, you’re in for a treat. There’s a massive collection of adventure films varying from cycling to climbing, trail running to surfing.

You can watch Blood Road for free here.

We left these two to the end as they’re not free. That is unless you have your friends log in details…

Pedal the World / an Adventure Around the World on a Bike

I’ll be honest, this isn’t my favourite cycling documentary Netflix has on offer, but I think it could be enjoyable watching if you’re about to set off on your first international tour.

This doc film follows Felix Starck, a relatively inexperienced cyclist, as he embarks on an 18,000-km journey around the world. It’s got a feel-good backpacker vibe to it, travelling through parts of South East Asia.

When Icarus came out, it was a huge exposé on the Russian doping scandal with a big insight into the Lance Armstrong story and performance enhancers in cycling.

It’s some pretty unbelievable viewing to see just how integral doping became in sports and the efforts people go to reach that number one spot.

One of the best documentaries on Netflix, for cyclists and everyone else.