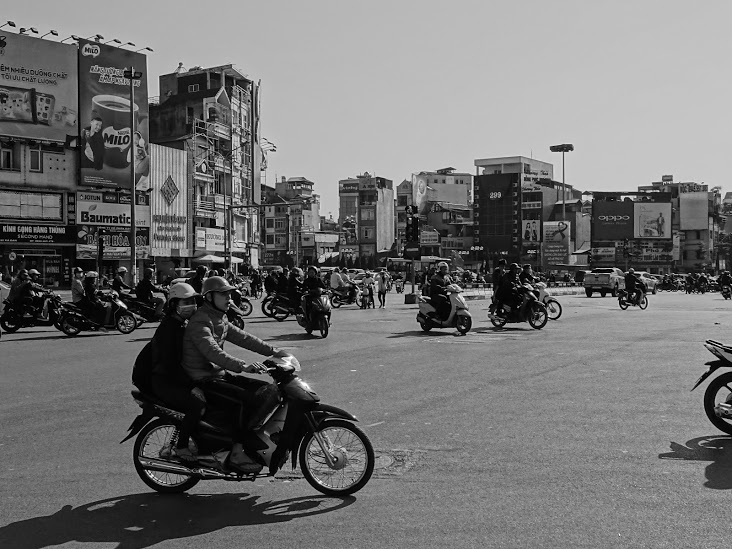 Can you survive Hanoi on a bike? And is it worth the benefits of cycling? My experiences after a year…

When I told people in Hanoi that I cycled around the city I would receive some very confused expressions. Many people thought it was I was pretty crazy.

Hanoi is one of most congested cities in the world. The sheer amount of traffic and pollution can only be understood after seeing it firsthand. For the majority of the day the roads pulse with motorcycles, cars and buses all in a mad panic to get to their destination in the quickest means possible.

This is a land where the highway-code is a mere suggestion, a place where when there is no room left to shove on the road vehicles switch to the pavements instead. Often described as ‘organised chaos’, the sea of vehicles swerve, dodge, overtake and hand-break turn, with larger vehicles always having priority. This means for smaller vehicles a completed journey should be considered a miraculous achievement.

At the bottom of the food-chain bicycles are a rare sight on the streets. Navigating the roads is difficult enough in an armoured vehicle, on a bicycle you really are at the mercy of the thousands of people weaving around you. This is why people would think I’m mad, a foreign girl on a bike cycling in Hanoi. To me though, the benefits of cycling outweigh the odd looks I get and the occasional games of chicken played with motorists.

Cycling has always been my favourite mode of transport. It’s the quickest, greenest, healthiest and cheapest option (besides walking). Cycling benefits your mind, body, soul and the world. I decided I wasn’t going to let a change of address stop me peddling from place to place. The locals cycled (sometimes) so why couldn’t I?

Shortly after arriving to Hanoi it became apparent I’d need something to get me from A to B for work. J had bought a motorcycle which we use when we were together but I needed to travel up to 10 km to teach my English classes.

Buses and taxis were incredibly slow because of the traffic and were also pretty costly – not an option. Despite the chaos I’d seen on the roads, and the warnings from locals, I went with my gut and bought a second-hand bike.

She was in great condition, had a basket and lock with it: everything I needed. She was beautiful and I called her Blue Bell. Off I went into the world as a cyclist on the streets of Hanoi – what a far cry from cycling in Europe!

Fast forward over a year from the first day Bluebell and myself hit the road to the time of writing this and I’m still alive! The experience has been character building to say the least and I’m proud of sticking to my guns by taking the greener option.

If a foreign girl can cycle the mean streets of Hanoi then there is nothing stopping YOU from taking the greener option too. No matter where you are, you’ve got no excuse (If you live in the Arctic or mountainous regions we might let you off).

Here are just some of the benefits of cycling and why you need to ditch those petrol polluting vehicles and find yourself a Bluebell!

Cycling is much greener

Most importantly for me is the fact that cycling is the greener option. This applies wherever you are in the world but in Hanoi the negative effects we’re having on our planet are very visible.

Whilst in Hanoi we used an app called Plume to show the pollution level in the city. To give you an idea of how bad the situation is, on the day of writing this the air pollution in London was at 18, in Hanoi it was 166. 166! And, unfortunately that’s not that bad for Hanoi, sometimes it exceeded 300…

To be honest you didn’t need an app to tell you how bad the pollution was. Some days you would struggle to see buildings 100 metres away, half the population live in pollution masks and most disturbingly your face and clothes would be filthy after a 10 minute journey across town.

Although a lot of industrial areas of western China impact the air quality in Hanoi, the main culprit is vehicle emissions. I was sad to discover, no matter the distance, the people of Hanoi would jump on their motorbikes to get around. Footpaths were just extensions of the road and sadly walking was not seen as an option.

In a city so consumed with pollution my desire to protect the planet was even stronger. With a population of 7.5 million inhabitants, if more people chose to cycle pollution levels could decrease significantly. People would be able to go outside without a mask and breathe fresh air. Perhaps the some animals would return to Hanoi, a city very obviously lacking natural life.

Being outdoors is meant to be healthy but when you have to wear an anti-pollution gas mask wherever you go the last thing you feel is healthy. We all need to take it upon ourselves and do something about this – remember one of the benefits of cycling is that is has no emissions at all.

Travelling to Vietnam? Here’s all the info and tips you need on how to get a visa for Vietnam

Not only is it better for the environment, cycling benefits your heart and circulation. Finding the time to exercise can be difficult so being able to commute and do some cardio at the same time is surely a winner? Each week most of us spend huge amounts of time travelling and if we did this by bike think of all the exercise we’d be getting!

Plus, all this extra activity means you won’t feel guilty about eating that extra helping of tofu (that I always seemed to indulge in). Even in polluted cities like Hanoi, why not make the best of a bad situation and burn a few calories during your morning commute?

Besides walking, cycling is the cheapest option – who doesn’t want to save a few pennies, ey? After the initial cost of the bike there is very little else you’ll be paying for. There may be a few maintenance costs such as replacing tyres or break cables but they’re cheap as chips compared to the costs of petrol.

The only other problem I encountered was getting a screw stuck in my tyre miles from home and needing a mechanic to fix it. Despite my lack of Vietnamese I managed to use hand gestures to explain the problem. 15 minutes and 70,000 VND later (£2.30) I was off again. If this had happened to a moped or car think how much more it would have cost.

Cycling is not as dangerous as you’d think…

Safety was the main concern when I told people I was cycling in Hanoi, and I won’t sugar coat it, the roads in Hanoi are horrendous. Daytime hours were bad but during rush hour the roads turned into an avalanche of vehicles emitting a constant stream of fumes into the atmosphere. All accompanied by a deafening amount of tooting and beeping.

As mentioned before the highway-code isn’t much of a consideration and the police have a relaxed attitude towards the law (unless they can get a bribe out of it). For locals and tourists this means road traffic accidents are unfortunately common. There’s a long standing debate in Hanoi about whose driving is worse, the locals or the expats. Regardless of where you stand on this debate there’s no denying the roads are a bloody dangerous place.

The only other people who seem to cycle in Hanoi are elderly men and women selling fruit or flowers. They’d leisurely go about their day merging with the frenzy of traffic. One of the disadvantages of cycling is definitely feeling more exposed, as a newbie to the city this was extremely nerve-racking at first.

Fortunately it didn’t take long to get used to cycling on the other side of the road, feeling just as comfortable as the locals peddling away. I became accustomed to the organised chaos and began to fit in amongst the madness. This goes to show that although it may seem daunting, as long as you use your initiative, you can master the roads of Hanoi and remain in one piece!

Check out some Vietnam travel tips before planning your trip

Growing up in Cambridge, a place where bicycles have more authority than cars, my main mode of transport has always been a bike. Even living in the hilly peaks of Sheffield for three years I never resorted to public transport. After continuing to cycle around Hanoi I realised it is so much better for convenience and independence.

The terrible traffic in Hanoi can make travelling during peak hours for motorists almost impossible. People often have to leave twice as early to get to their destination and the constraints of public transport often limit your choices. When driving a moped you’re (supposedly) restricted to the roads and you’ll also find lots of parking limitations.

On a bike things are very different. Cycling benefits you with independence, allowing you to avoid major traffic jams and go wherever you want, whenever you want. It also gives you a great chance to stop and take in your surroundings whenever something catches your eye.

If you’re thinking of cycling around Hanoi staying safe on the road is the biggest priority. Even if you’re tackling the roads properly you’ll be surrounded by people who aren’t. It’s definitely worth a small investment to say safe on the road.

A Girl on a Bike in Hanoi: Cycling Benefits in the Big City

The draw of owning a motorbike in Hanoi, being so much cheaper than the West, means a lot of expats and tourists don’t consider greener options and just follow the locals. Just because the majority do one thing doesn’t make it right.

There are many reasons why I chose to ditch the moped and cycle in Hanoi: it’s cheaper, greener, healthier and far better for the environment all at the same time. With pollution levels in Hanoi rising and the increasing impacts of climate change threatening our planet, it’s time to change our ways! Hop on your bike and experience the greener side of travel and I’ll bet you won’t regret it!