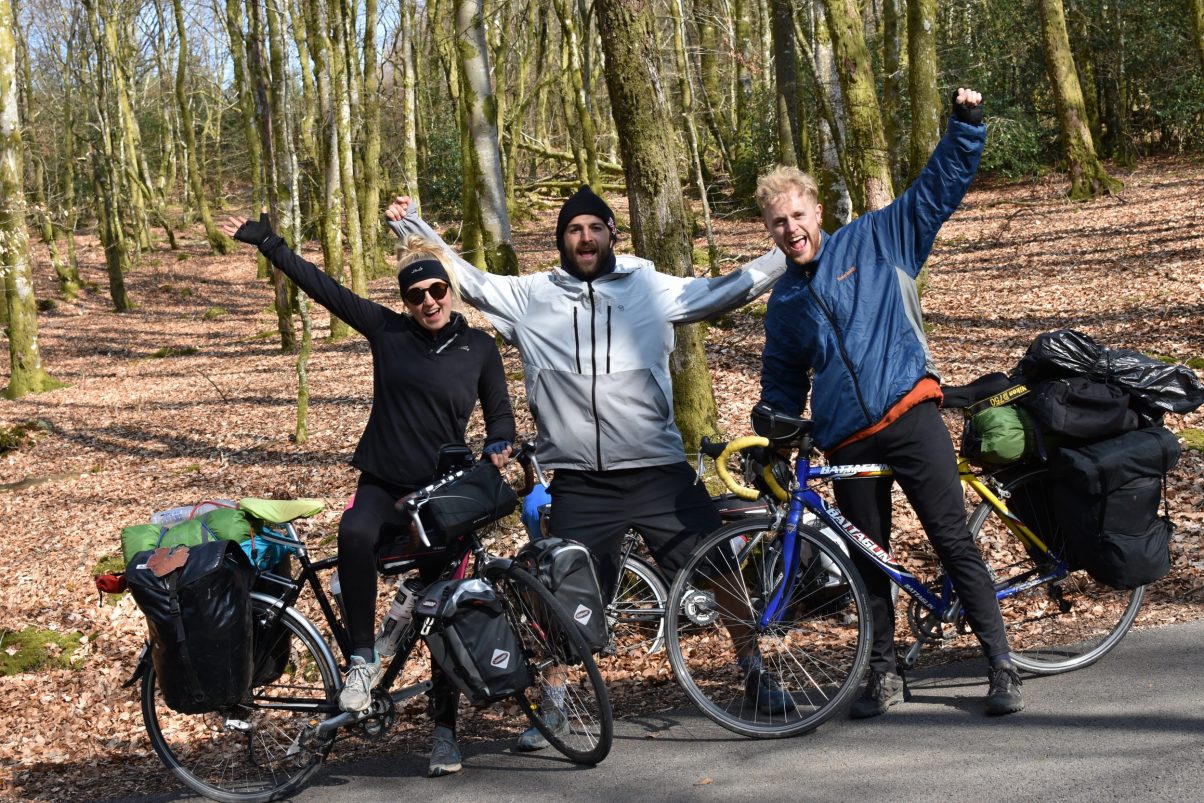 Our adventures up to week 6 on our England to India cycle tour.

46 miles doesn’t seem like a huge distance. During our Three Peaks Challenge we flew through 80+ miles a day relatively easily however this distance really took its toll. Despite a 9 hour push to conquer these 46 miles, through hills that never seemed to drop and chaffing in regions that really should never chaff, we still managed to muster a smile for a team photo.

This day was slap bang in the middle of a week long push, all the way from the forest of Fontainebleau 323 miles further south to the pearly gates of Lyon. On our seven day stretch we battled with freezing temperatures (and frozen tents), got defeated by off-road mountain bike tracks and pushed for miles and miles in search of food.

Whining aside, this has also been the most exciting part of our cycle trip to date. Our journey has taken us to ancient hilltop basilicas, through dense national parks and under soaring birds of prey. Besides the colder weather and one day of wind and rain, spring is now in full force and the sun is finally shining upon us. It’s warmed our spirits, our backs and also given us a few dodgy tan lines which are only beginning to fade.

These awesome experiences have been made even better by our best friend from home: Ed, who has joined us for the last 300 miles. Another advocate for sustainability, Ed chooses not to fly and instead boarded his bike upon the Eurostar from London and met us in Fontainebleau. We love life on the road, working as a team, but having a chum visit from home reminds us how lucky we are to have such a beautiful foundation in the UK. Together Veggie Vagabonds became a three and we hit the trails together. Besides his quick puns, philosophical thinking and French speaking (always thrown in with a few Spanish words), he also quickly became tour photographer which was warmly received.

People had warned us that Vezelay was perched on top of a hill and at the end of a 50 mile day it really polished us off. From a few miles out we could see it towering ahead and the uphill section almost gave us a heart attack. For the last 100 metres the incline was eye-watering and I was having to mental coach myself to breathe properly and not hyperventilate. Frustratingly the incline seemed very manageable when we walked past later in the day but at the time it was a whole world of pain.

Vezelay is a characterful town, designated as a UNESCO World Heritage Site and home to the Basilica of St. Magdalene which dates back to the 11th century. The cobbled streets seem unchanged by time and all the terracotta roofs give the whole area a glowing tinge. There’s little public transport here, so you really only find locals, people on French road trips and potentially a few cyclists like us.

To ease our achy muscles we sampled a selection of wines produced in the region at 11 am and then found our way to a local brewery which had some AWESOME craft beers and ales. The stout was particularly delicious!

Besides Fontainebleau this was actually the first place we got to explore on foot and it was a welcome change from two wheels. Obviously we love cycling, this would be a silly trip if we didn’t, but we also LOVE ambling along at a snails pace with our cameras and following our senses on two feet.

This was also the place we experienced our freezing temperatures. It got to -5°c and although our tent, water and most of our food froze it was beautiful crisp and quite enjoyable. Thank you Vango for our sleeping bags which are good up to -17°c. The same couldn’t be said for Ed, whose only form of bedding was a sleeping bag liner. He said it was one of the worst nights of his life.

The freshest start to a day!

These freezing days also taught us the best ways to feel energised in the morning is to jump in an outdoor shower at minus temperatures. The first commitment of standing under water takes true dedication and the drops hit you like stones. Needless to say, I was showered and dressed in less than 5 minutes, tents packed up and ready for the road within 20.

The nippy morning start gave us a short lived boost but really didn’t prepare us for the hills to come. We were warned by two elderly, non-cycling Warm Showers hosts that the Morvan National Park was hilly but with a slight sense of arrogance we didn’t pay much attention. The 46 mile push was brutal and the 10 hours it took to reach our next destination was only manageable because of our beautiful surroundings. In the 6 weeks we’ve been on the road, for me, this was by far the hardest leg of our journey.

As well as the hills this section was made tougher by Ruth (our GPS, named after her ruthless mapping). She’s our friend for 95% of the time but the other 5% really has a vendetta against us. With roughly 25 miles to go she began routing us into thicker and thicker woodland and onto smaller and smaller paths. The smooth tarmac and gentle corners were replaced with a slush of mud and pebbles, spotted with agonising potholes. Before we knew it we found ourselves clattering along downhill mountain bike tracks, trying to weave in and out of trees. If you’re not aware it’s not very easy to weave in and out of trees on a down hill mountain bike track whilst you’re on a touring bike with 40kg of gear. 5 minutes later we also found out that it’s even harder to do it up hill.

Because of the thick mud our breaks had fully seized up, with our wheels barely turning. On Sarah’s bike we had to completely disconnect the breaks and by this point Ruth had decided to jump ship and lost signal. It took us nearly two hours to do a full loop around the mountain bike track, probably only 3-4 miles, and eventually re-join the road where we had originally started.

I don’t want to fill this article with complaining, so it’s important to add that however hilly the route was (and however dizzy I felt during the uphill sections) it was worth every drop of sweat. The dense woodland of Morvan National Park was immense and the therapy of coasting along its windy roads was priceless. For hours and hours we weaved, completely away from traffic, through protected woodlands, lakes and farmland. The sun was blotted out by the thick trees and after a prolonged uphill section we’d then get 4-5 miles of beautiful downhills, snaking our way through the shady foliage.

If there’s anything that bike touring has taught me, it’s that your days are going to be fucking tough, but boy will they be worth it.

This has been from our adventures up to week 6 on our England to India cycle tour. If you want to check out the rest of our bike journey then click here!