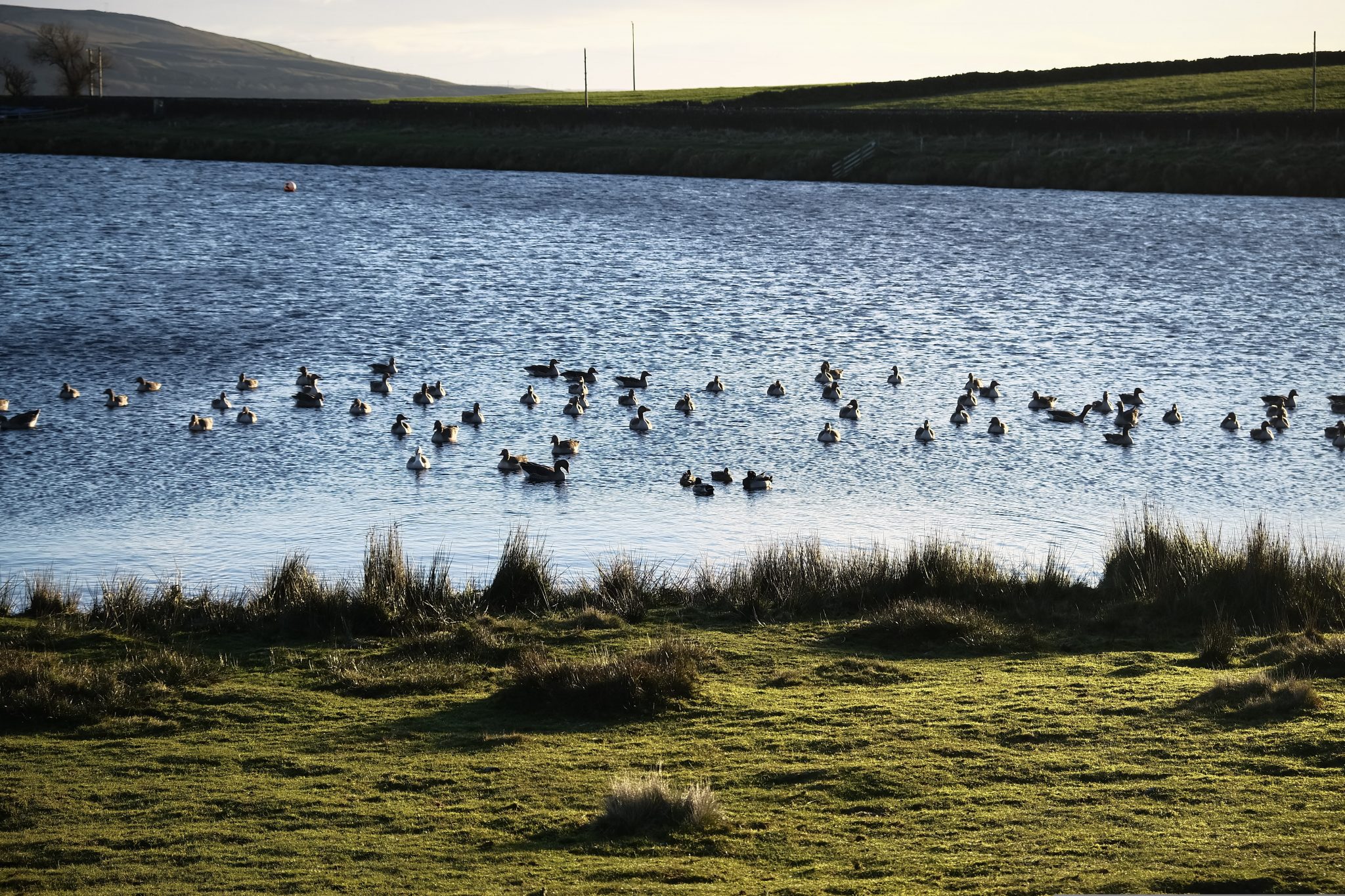 Is down cruelty-free? Can it be sustainable? Let’s take a look and explore some down alternatives!

Down feathers are quite a controversial issue.

This highly-insulating material is made from bird feathers and is used in a whole host of outdoor clothing and products. It’s often seen as a naturally occurring by-product of the meat industry, making use of a natural material that would otherwise be wasted. But is this really the case?

We take a dive into whether down really is just a by-product, its effects on the planet, the birds and the ways it’s produced.

We’ll look at the ways it’s gathered and check out some undercover investigations, trying to answer whether it can really be ethically sourced. Plus, will look at some cruelty-free alternatives to down and their impacts too.

Down is the soft layers of feathers closest to a duck’s, swan’s or goose’s skin, most commonly from the chest and belly regions.

These feathers are then used in clothing, sleeping bags, pillows, duvets and other products as insulation. It’s primarily used for cold-weather garments and has been around for centuries.

How is Goose Down Collected?

There are three main ways that down is collected:

1. One way is post-mortem, which means after the animal has been killed. Once the duck, goose or swan has been killed for its meat, which is the flesh or organs (like foie gras), the feathers are removed. This is done by submerging the body in scolding hot water and plucking the feathers by hand or a machine.

2. Another way is live-plucking, which is pretty much how it sounds. Feathers are plucked from the birds whilst they’re alive. As you can imagine this is pretty horrific and violent (but more on that later).

Because feathers grow back, this process can be carried out every 6-7 weeks until the bird is killed for consumption, or it dies from the trauma and injuries from plucking.

The other way is collecting feathers by brushing and combing birds to collect their feathers. This process usually happens in mass with birds at different stages of moulting. Birds have to be restrained to be brushed, which can result in live-plucking taking place.

Down as a By-Product

Although it has been said that down is a by-product of the meat industry, I’ve not been able to find this verified anywhere.

The exception to this is eiderdown which is gathered from wild birds’ nests, where it’s used as insulation to protect their eggs and later chicks.

Otherwise, all other types of down come from birds raised for the meat industry. Predominately in Asia for Peking dishes and in Europe for festive duck dishes. The two industries are directly linked and not separate from each other.

If anyone does know otherwise from this, please tell me in the comment or drop us a line. I know it has been countered that it is a by-product so would love to know if this is in fact the case.

Want to be the first to get our vegan and cruelty-free gear guides and adventure tips? Sign up for our newsletter to get our latest articles

Animal Cruelty From Down

The process of raising and harvesting birds for their feathers has a lot of hidden cruelties behind the scenes.

The process of live-plucking is extremely cruel as ducks, swans and geese are held down, sometimes stamped on, to have their feathers plucked whilst they’re alive. They are given no anaesthetics and are often left with wounds from the process.

These wounds are often left untreated, which can result in horrific injuries, infection and sometimes death for the birds.

Because birds’ feathers grow back, this process is then, unfortunately, repeated roughly every 6-7 weeks, until the birds die from the process or are killed for their meat.

China is the world’s larger exporter of down producing more than 80% globally. That’s roughly 2.7 billion ducks and 653 million geese raised for consumption and their feathers used for down, according to the International Down and Feather Bureau (IDFB).

As you can imagine with all those birds, space is tight. This means that these birds are often kept in cramped living conditions, that are often filthy from all the animal waste. There’s little to no sunlight with limited food and water supplies.

This is a breeding ground for disease and infection from the birds’ wounds. The birds can often become very distressed and may fight each other due to lack of space or limited resources.

A lot of down comes from birds that are raised for consumption. This is their meat and their organs for foie gras.

Farmers who raise their birds for meat will harvest their feathers to turn a profit. This means the two industries are linked to one another. Making use of the duck’s feathers that have been subjected to the cruelty of the foie gras industry, doesn’t take away from the suffering they endured.

Animals as a commodity

This cruelty is being inflicted on live ducks, geese and swans.

In the wild, ducks, geese and swans spend time in the water on land and in the air. Ducks and geese fly hundreds of miles each year to migrate in formations. Ducks live in couples and groups and mate for life, mourning their partner when they die.

These are animals that should be able to live the life most natural to them, not abused and slaughtered as a commodity.

Is Wool Vegan? What is Vegan Leather? And More of Your Vegan Questions Answered

All of our vegan gear guides and resources for ethical adventures

Environmental Impacts of Down

Down farming can also affect the planet in negative ways, from the way it’s farmed and produced:

Air Pollution and Emissions From Down

Harmful gasses such as carbon dioxide and nitrous oxide are emitted from the production, food and transport industry associated with rearing livestock. Totalling 14.5% of global greenhouse gasses.

Other gasses such as ammonia, hydrogen sulfite and other compounds released from livestock farming have been found to have a seriously negative impact on human health.

The release of the compound into the atmosphere contributes to global warming with far-reaching implications.

Impacts on Land and Soil

Agriculture is one of the leading reasons for soil erosion, with huge swaths of natural habitats being cleared to rear animals and their food. This can lead to deforestation and the decline of natural species.

Land is cleared to rear ducks in captivity and growing their food can lead to whole ecosystems being threatened.

Runoff from farming and production can contribute to eutrophication and toxic algae bloom. This build-up causes the algae to suck all the oxygen from the water, killing native plants and animals.

Antibiotics, pesticides and hormones can be leaked into natural waterways from farms and crop fields. It’s estimated that 46% of rivers and streams in the USA are in biologically poor condition as a result of nutrient pollution.

Can Down be Ethical?

These certifications aim to ensure the Five Freedoms for animals:

As most consumers don’t want animals to suffer, these organisations look to ensure birds are well treated when their feathers are used for down. If down is gathered from the floor or post-mortem, the suffering inflicted on the duck is lessened but they all are eventually slaughtered for consumption.

However, shopping with these labels doesn’t always ensure that birds are treated well. PETA released footage of animals being live-plucked from RDS and TDS-approved companies. They interviewed people anonymously who said that companies often lie about their plucking process and mislabel products.

Is Down Environmentally Friendly?

Although there are some environmental implications associated with down and livestock rearing, it can be a more sustainable alternative to other fabrics. When down was compared to polyester fill it was found to have 85% – 97% lower environmental impact.

Comparing human health, ecosystems, resources and cumulative energy, down was found to have a lower impact than polyester. Down is a naturally occurring material which means it is easier to recycle and it’s biodegradable.

The impacts of down on the environment are not as harmful as other materials from animals such as wool or leather.

What Are Alternatives to Down?

Although down has some good properties making it a popular choice for winter garments, there are some cruelty-free down alternatives to rival it that are vegan and insulating:

These alternatives are a great cruelty-free alternative with some rivalling down’s warmth and breathability properties, can perform better when compressed and can often be cheaper too!

Although all these materials are animal-free, they are oil derived which means they take thousands of years to biodegrade. Plus there are lots of harmful chemicals and gasses emitted through the production process.

If you want to opt for cruelty-free options that are also good for the planet, keep an eye out for recycled synthetic materials. Nowadays a lot of synthetics are made from recycled plastic bottles etc. which is a winner all around.

When looking at down as a product on its own, it has a lower environmental impact than other materials on the market. However, the meat and foie gras industry are directly linked to the down industry.

Down has its own market and demand separate from the meat industry and making use of the feathers from birds through their life and after death, doesn’t take away from the harm of these industries.

Down is more environmentally friendly when compared to other insulation types, however, I feel it’s important to take into account of the whole process. This involves the slaughtering of birds for the meat industry, with the ethical and environmental implications associated with the whole industry.

With a lack of transparency from down farms and inhuman practices in place, it’s hard to know where down is actually coming from. Most importantly it’s important to shop responsibly, for gear that will last. Our guide to ethical outdoor clothing can help you to find the right gear you need, from responsible sellers.

Are ducks plucked alive for down?

Depending on the way the down is collected ducks may be plucked alive. Some companies endeavour not to use live-plucked down, however, investigations from PETA show that it’s common practice on down farms.

No down is not cruelty-free, because it comes from birds kept in captivity and some of the methods involve the birds being harmed.

Compared to materials like wool and leather, down has less of an environmental impact.

Can vegans use down?

Vegans try to abstain from using animal-derived materials or materials that cause harm to animals. Down comes from birds raised in captivity, then killed for slaughter, so is not a vegan.