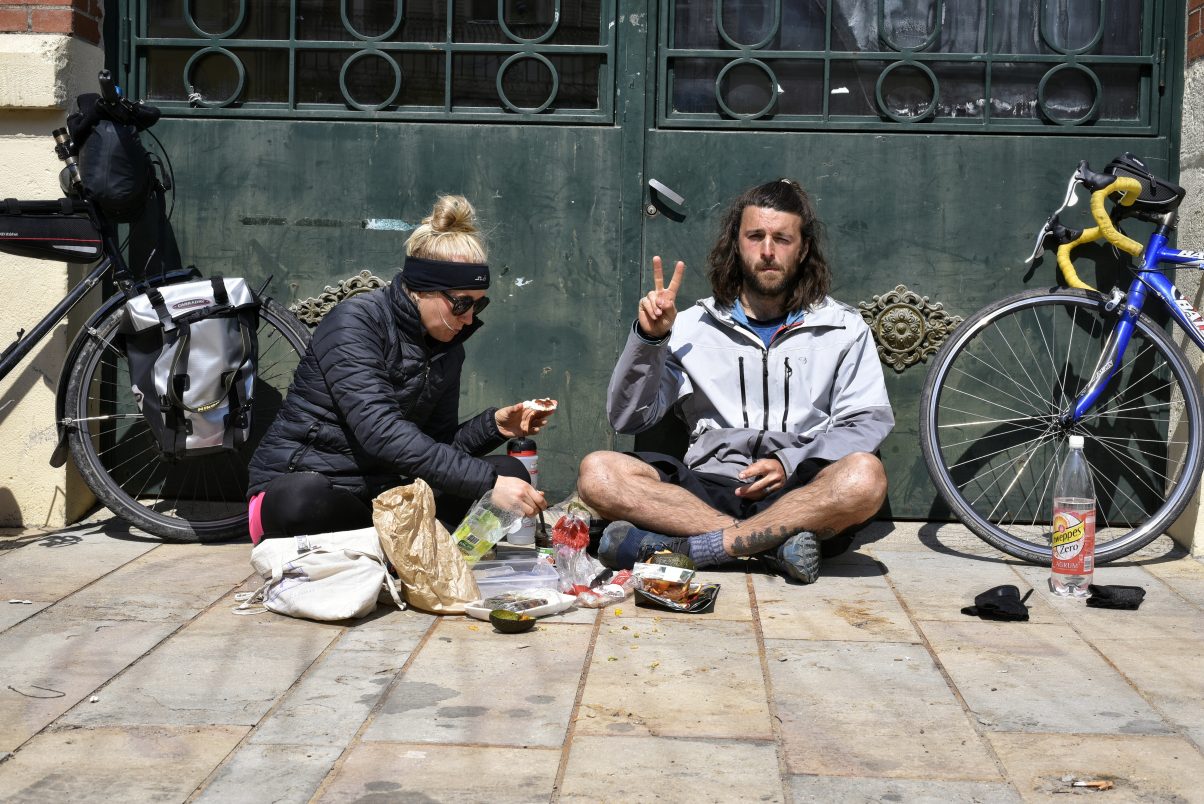 Thinking about travelling as a vegan in France and want to know what it’s really like? Here’s the honest opinion of two plant-based vagabonds currently cycling across the country

I won’t beat around the bush, travelling in France as a vegan isn’t easy, in fact it’s quite difficult. Coming from England where veganism has really taken off in recent years and where there’s an abundance of vegan food options we’ve been pretty spoilt. We weren’t expecting to find an abundance of veganised supermarket goods, or completely vegan menus, but we were expecting a slightly better situation. Whether it’s quiet villages or big cities, being a vegan is difficult all over France so you’re food options are unfortunately limited.

A word to the wise, shops selling food are sparse in France, especially in the North. The first part of our trip was spent cycling through this part of the country with only framers’ land for miles and miles. Hardly any cars drove by and there were no built up towns or cities, in fact there was very little infrastructure at all. As cyclists we thought this was glorious, pedalling through miles and miles of empty fields and country lanes with only the the sun and birds overhead for company.

This tranquillity is all well and good until lunchtime when tummies start to grumble!

We’d ask locals and knock on doors asking if there were any shops nearby only to be met with chuckles and looks of astonishment that we would want to buy food. Yes, food, you know the thing the French are famous for? Finding places to buy food, any food, was surprisingly hard to come by. Even when you come across a large village there may not be as much as a bakery. And, if you did start to spot some food vending premises on the horizon often you’d arrive to ‘closed’ sign, as many local shops shut for lunch for a few hours in the middle of the day.

You gotta plan ahead

With this in mind planning ahead is vital and we gradually started carrying more and more food with us as we passed through the country. Whether it’s lack of vegan options, lack of shops or obnoxiously long lunch hours, you gotta plan ahead! When you do come across somewhere with some plant-based goodies, even if you’re not hungry at the time, stock up!

This is a frustratingly common situation in France, especially because of the points I mentioned above;

You come across a shop that is actually open and in all your excitement and hunger seek out the tastiest looking treats from the bakery shelf.

You ask if it has eggs, honey and dairy to which your surprise the answer is no – amazing!

You jump for joy, who would of thought, an accidentally vegan treat in a French bakery?

Then the baker responds ‘it just has butter in it’….

Does French butter not contain dairy? Unfortunately it still does but in France butter and dairy are two different things. We don’t know why or how, for some reason they just are. So be warned in your excitement to scoff down that yummy looking croissant you think is vegan, because it’s prob not – soz! The lesson is, always ask if it’s got butter as well as dairy when checking the ingredients.

You’ll probably end up consuming a LOT of bread

Because vegan food is so hard to come by, and bread is sold in almost every shop, you end up consuming more bread than you ever thought possible. And, it is bloody good bread. Breakfast, lunch, dinner, you name it and bread is likely to be the answer. The only difficult part is finding something to go with your bread besides jam… the struggle is real.

The environment and sustainability is damn important

There are so many stunning French destinations, it’s fairly obvious why the locals are keen on protecting their country, and you can really see this with how eco-minded communities are. Even in supermarkets and markets, you’ll find a whole lot more plastic-free goods and the majority of people carry reusable shopping bags.

You’ll also find large dispensers where you can refill jars and bags with nuts, pulses, dried fruits and even biscuits! We’ve been joyed to see how much more aware people are in France and that people are taking it upon themselves to do what they can to protect our mama Earth.

You’ll struggle to eat out at French restaurants

Unless you’re spending a weekend in Paris or Lyon, you’re unlikely to find many vegan restaurants in France. And, though traditional French food is often thought to have very few vegan options, I can tell you there are pretty much NO vegan options. Actually, if you’re French or a vegan living in France and know of any traditional recipes that are naturally vegan we’d love to know.

In French restaurants if you manage to find something that isn’t meaty then it’s just been replaced with a gastronomical amount of cheese. All of the pastries contain eggs, honey, dairy (or butter…) and when asking if anything can be made without these ingredients you’re met with confused looks: ‘but why would you want no cheese?!?!’.

All of this equates to French restaurants being pretty off-limits with the exception of fries and the occasional salad.

Good ingredients are of great importance

Although it may be tough to eat out in France, finding good ingredients is a much easier feat. The French care about what they eat, and the basis of a good meal is good ingredients. Whilst travelling across this beautiful country we’ve realised how much emphasis people put on eating fresh and chemical free fruits and veggies. The residents of France know the power they have as consumers are really support buying local, seasonal and organic food. With this demand for quality ingredients it means you can easily find deliciously natural fruits and veggies to feast on.

It sucks missing out on the traditional dishes

One of the biggest bummers for us is exploring a country and not being able to try the traditional dishes. French food is so cheese and meat rich it means that as vegans there’s not much, apart from bread, that you can sink your culinary mitts into.

Not only do you miss out on trying traditional dishes in restaurants it can also be the case at peoples’ homes. French people tend to eat traditionally, so when they have two vegans to dinner accommodating them can be a bit of a struggle.

Whilst staying with hosts we’ve had offers of raclette, quiche and leek pie… all of which we’ve regrettably had to turn down on account of them not being vegan friendly. This is not to mention the wafts cruelly enticing us as we walk past restaurants and houses, all of French culinary treasures we’ll never get to try.

The French are very hospitable, even to vegans!

Despite French food being pretty much a no-go zone we have found the locals to be incredibly accommodating of our vegan ways. Whether it’s been staying with cycle hosts for one evening or longer-term work exchanges we’ve found people have gone above and beyond to prepare food that is vegan friendly.

This has been overwhelmingly hospitable and beyond what we expected to experience. To be a last minute guest in someone’s home and for them to whip up a dinner of something completely alien to them, for two sweaty, hungry cyclist is pretty generous. Sure we’ve been turned down by one or two hosts on account of our vegans ways but overall France has been very accommodating and for this we are truly grateful!

Supermarkets cost pretty much the same as England

Obviously this depends where you are in France but don’t be expecting things to suddenly become a lot cheaper once you cross the channel. Supermarkets average out at the same price as England across the country. Also if you’re looking for vegan “luxuries” such as cheese and sausages then be prepared to fork out for them as they certainly come with a luxury price tag.

In England pretty much everyone knows what veganism but in France it can sometimes get a bit confused. We’ve encountered many locals who think vegans eat cheese and have been shocked when we’ve told them that in fact we don’t. Whether the term ‘vegan’ isn’t widely known, or whether people get it confused with vegetarianism, you’ve got to make it clear exactly what you don’t eat.

So honestly there are some difficulties to travelling and finding vegan food in France but there are also so many highlights to experience. Don’t let the trials put you off, being a vegan anywhere in the world has it’s downfalls but there’s too much to miss out on in France to let this deter you.

Have you ever been to France? How did you manage finding vegan food in France? Let us know in the comments below!