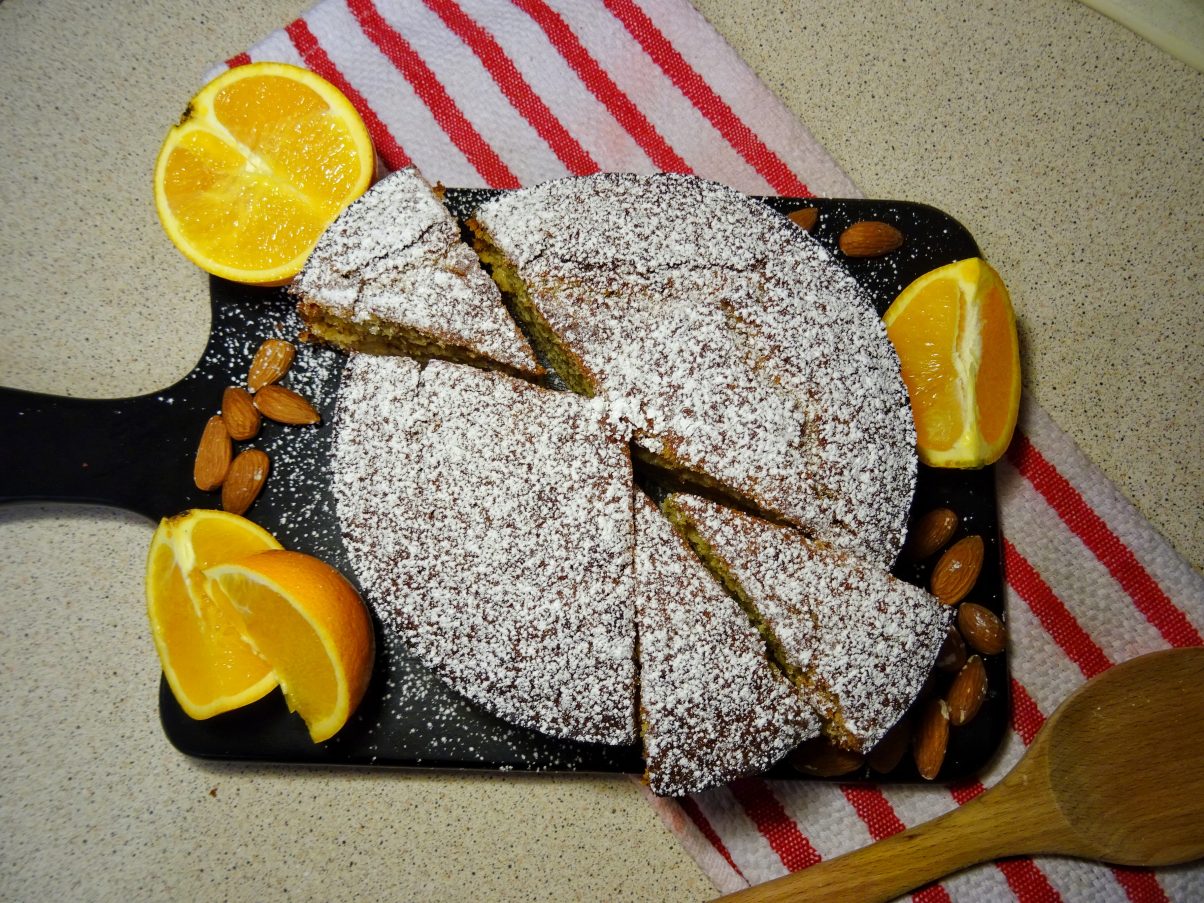 This vegan Portuguese honey, almond and orange cake is zesty, delicious, bursting with flavour and based on a Portuguese classic!

As with most of our recipes, this Portuguese vegan cake was inspired by our travels. In Portugal, we were constantly surrounded by delicious-looking food but realised that Portugal is a land filled with avid fish, meat and dairy eaters. Fed up of missing out on regional specialities and traditional dishes we thought something had to change. So, we put our culinary caps on and came up with this deliciously moreish Portuguese vegan cake!
Using no refined sugars, this cake instead uses agave nectar and fresh oranges for sweetness, giving it a sharp, authentic taste. The result is a truly sublime vegan twist on an amazingly traditional Portuguese cake.

Some Portuguese vegan cake history
(because it’s always nice to know about what you’re eating!)

During the 15th century monks and nuns paved the way for confectionery throughout Portugal. Surprisingly these holy folk were commonly paid by the poor with chickens and eggs. To starch their laundry they would use egg whites which meant a lot of leftover egg yolks. With a bit of creativity and a lot of time on their hands, they conjured up an array of recipes to use up all the eggy leftovers. These recipes have grown world renown and have been enjoyed for centuries but unfortunately not by us vegans.

The authors of Fabrico Próprio: The Design of Portuguese Semi-Industrial Confectionery, described “These places of faith and seclusion were often true laboratories of creation, where the religious dedicated themselves to rescuing old recipes, or to testing new ingredients from all over the world.”

With so many convents in Portugal, the variety of sweet treats was abundant and enjoyed across the country. Traditionally the main ingredients would be egg yolks and sugar with flour, nuts, cinnamon, vanilla, coconut and other spices that Portugal enjoyed because of trade and colonial ties.

When the Portuguese first brought sweet oranges over from India and China they were very expensive and only a luxury enjoyed by the rich. As time went on and sweet oranges became more widely available they were combined with original religious recipes creating the honey, almond and orange cake we know today.

Now as interesting as this may be it’s not much use to us vegans. To be blunt, Portuguese food is not “vegan friendly”, nor has it ever been and this recipe traditionally contains eggs. Never ones to miss out on a tasty treat here at Veggie Vagabonds HQ we’ve devised a super scrummy Portuguese vegan cake that is zesty, gooey and scrumptious.

This cake uses no refined sugar and instead uses agave nectar and orange for sweetness. I think it’s that much better using naturally sweet ingredients rather than processed sugar. This is also the first recipe on the blog that uses ground flax seed as an egg replacement. I’ve always been put off by the price tag but decided to try something new as it’s very good for you. The end result was a success – I am a convert and look forward to many more recipes with flax eggs.

So give this classic Portuguese vegan cake a go and let us know what you think in the comments and #veggievagabonds on social media.

Method;
1. Grease a baking tin, roughly 20cm, and preheat the oven to 160°C.
2. Make the flax eggs by mixing the ground flax seeds with the water and leave to set for about 10 minutes.
3. Whisk the flour, ground almonds, baking powder and salt until evenly combined.
4. Once the flax eggs have set whisk with the agave nectar, then add the orange zest and juice.
5. Fold the wet mixture into the dry mixture until fully combined.
6. Pour the mixture into the baking tin and bake for one hour or until golden and a toothpick comes out clean.
7. Leave to stand for an hour before cutting to allow the cake to fully bind. Then serve and enjoy!