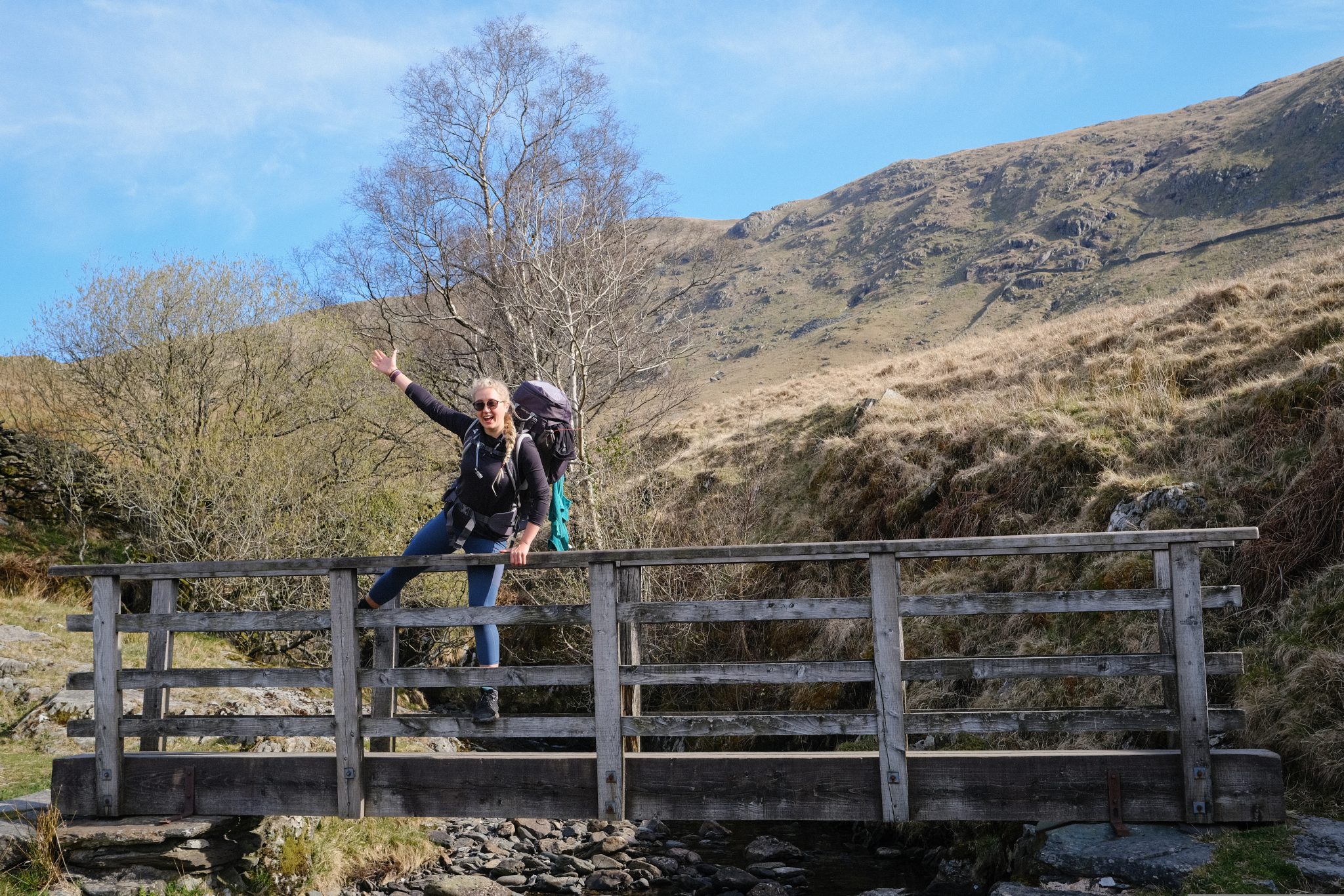 Sometimes the most unexpected things can have the biggest impact

At Veggie Vagabonds, we’re damn passionate about ethical adventures. We think it’s pretty much the best thing in the world.

And veganism has a BIG part to play in that. In our eyes, ditching animal products is one of the simplest and most powerful steps many people can take to reduce their impact on this wonderful world.

Recently, we realised there’s lots of focus on the HOW TO, but not much about WHY. Why we even opted against animal products in the first place. And it’s a question we get a lot. Particularly a bunch of years back when vegan lifestyles were about as common as a VHS is now…

So, I thought we’d dive into that a little, with some of the main things which helped us switch to a completely plant-powered lifestyle. Some of them aren’t what you might expect.

It’s not listed in terms of importance and it’s not chronological either. At the time of writing, we’ve both been vegan for 6 years but spent a good 1.5 years slowly transitioning from vegetarians. To this day, it’s one of the best decision we’ve made and these are the surprising events that got us here.

We fell in love with outdoor pursuits

We reckon veganism and the outdoors go hand in hand. And there’s a big reason why we try and help people get outside.

Personally, the more time we spend outdoors the more connected to our surroundings we become. I think it’s the same for others too. It seems pretty hard not to want to protect the natural spaces that make adventures possible, right?

The more we fell for outdoor pursuits, the more we realised the UK has barely any wild land left: nearly 80% of the country is made up of agricultural land. And the majority of this is used to rear livestock or grow their feed. It’s a huge source of water pollution, habitat loss and the plummeting biodiversity levels we’re seeing.

Though it might not seem so at first glance, hunting and animal agriculture are some of the biggest threats to outdoor spaces. Whether you’re a hiker, biker, climber or swimming, it seems like a no-brainer to distance yourself from them and help protect the environments you explore.

This is actually what inspired our Ride for the Wild cycling challenge – check it out!

We planned a cycle tour

As takeaway-munching students, we were pretty aware we’d need to get fitter before our first cycle tour.

Coming from a veggie diet, the cheese and dairy products we ate were just additional toppings on dishes to make them tasty. We loved pizza. And let’s face it: melted cheese is pretty damn delicious on a lot of things. But it’s not very healthy.

When we first started moving towards veganism, there weren’t a whole load of vegan meat or dairy alternatives available. It was a long time before Beyond Burgers and all that jazz. That meant cutting dairy would make our diet mostly wholefood-based and a lot healthier.

Our cycle touring was a good prompt to cut out the melted cheese!

Thinking about making the switch yourself? These 17 tips on how to become vegan for outdoor lovers will help you stay inspired.

We changed our TV habits

When we first met, we binge-watched a lot of Game of Thrones and Breaking Bad. As awesome as they are, we decided to switch to some more eye-opening watching and go for documentaries instead.

This had a huge impact and two that particularly did were Earthlings and Cowspiracy.

Earthlings is an upfront and brutal documentary showing the reality of animal agriculture. It goes behind the scenes in battery farms, slaughterhouses and looks at the impact of leather and fur too.

I’ll be honest, it was damn hard to watch. But if anything is that horrific, surely it shouldn’t be going on, right?

For us, this was really the nail in the coffin for dairy products. It made us realise that, if you really want to stop contributing to pretty unbelievable animal cruelty, milk, eggs and dairy products gotta go, along with meat and seafood.

Our switch to veganism is as much about the environment as it is about animals too. And this is where Cowspiracy really made an impression.

Cow farming is one of the leading causes of deforestation and cows – there are nearly 1.5 BILLION in the world – burp and fart out billions of gallons of methane each day. Ya know, the stuff that’s 80x more damaging to global warming than carbon dioxide.

Water consumption is also a massive point: 1kg of beef requires roughly 15,000 gallons of water to be produced. Most fruit and veggies use less than 1,000 gallons. When millions of people around the world die from lack of water, it seems like an obvious thing to avoid.

Once we had some of these images and statistics in our head, it was pretty hard to consider anything but a plant-based diet.

We put together a list of some really powerful vegan documentaries here if you want more recommendations.

We didn’t have much money

We were pretty skint students when we started moving towards full herbivore mode.

Nowadays there are plenty of expensive vegan products you can splash your cash on. 7-8 years ago, there weren’t.

Cutting out the cheese we always got lured into buying from the deli around the corner would save us a handsome sum. This meant more money for beers – sold!

We went on a life-changing trip

There are so many huge benefits to travelling. One of the biggest is that it opens up your eyes to the ways of the world.

In the UK (where we grew up), to a certain extent, you’re pretty sheltered from the environmental damage going on around the globe. Sure, you see it on TV, but it rarely has the same impact as seeing things first-hand.

On our first big adventure together, we spent 18 months travelling through Sri Lanka, Indonesia, Malaysia and Vietnam. Don’t get me wrong, there were heaps of completely mindblowing experiences, but that wasn’t the lasting memory.

What really shook us were the coral reefs that had been bleached lifeless, whole national parks uprooted for agriculture, ecosystems that had crumbled because of rising temperatures, plastic pollution to a whole different level.

And it was all impacting local communities too.

We visited villages whose only natural water sources had dried up, families who couldn’t feed themselves because of biodiversity loss and saw air pollution that seemed like it was from a post-apocalyptic horror film.

Seeing it first hand was hard to swallow. What made it worse was knowing that most of the issues weren’t being caused by locals, but because of the demand from lifestyles in more developed countries.

Veganism is the single biggest way to reduce your impact on the Earth, and that’s something that needs to happen.

We got back from the trip shocked and humbled. Shortly afterwards we stopped flying and made big changes to eat more plant-based, locally-sourced foods.

We spent more time in the countryside

Damn, there are some sounds that come from farms that will absolutely haunt you. Plenty of times you’ll hear animal cries, particularly from cows, echoing down the valley. It chills you to your bones.

In these lightless, enclosed pens, everything is hidden from outside eyes, but those noises are coming from animals that are clearly in an extreme state of distress.

It’s pretty soul-destroying thinking we, as human beings, are causing that kind of suffering.

Altogether, the experiences above prompted us to take things a bit slower and sparked our interest in mindfulness. It’s something we can benefit from in all aspects of our lives, particularly with decision making.

Every action has a impact. We’ve just got to make sure it’s as positive as possible.

And as a consumer, now it’s more important than ever. The vast majority of manufacturers create products with no consideration for anything other than profit whilst our environment and its inhabitants feel the brunt of it.

It’s pretty crucial to not just see a product on a shelf or a coat hanger but to instead think about how it got there. Then you can consider the impact of buying it and whether it’s something you want to support.

It might require a bit more time or even void some options but it’s worth it in the long run.

Our road to veganism was spread out over a few years but it’s a decision we’ve never regretted. It’s now easier than ever and the benefits are beyond belief.

This article wasn’t written to say “you should go vegan!” either. Everyone has their own situation and it is a big lifestyle change. But, any step away from animal products really does have such a positive impact – it’s a step in the right direction.

If you’re interested in switching to a more plant-based lifestyle, drop us a comment, shoot us an email or reach out via email, we’d love to help share some guidance or advice.

We’re also interested to know if there are surprising things that influenced your switch to veganism – let us know in the comments!